Pretty much nails it, hilarious.
Gayer to not be gay in prison.
It’s racist if you can’t rap
Latino respect someone that can sleep on cold hard concrete. Yes, even more so if your head is by the toilet. 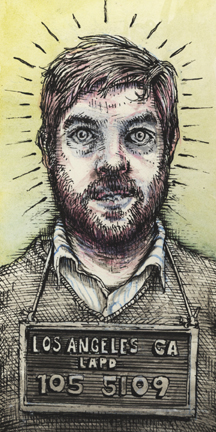 Do the Math: CITIZEN HEAR ME OUT! THIS COULD HAPPEN TO YOU!
by Dave Reeves

If you are reading this magazine then there is a pretty good chance that you break some stupid ass law every other day. Be it dabbling in tax evasion, watering your lawn on Thursdays, smoking weed, walking your dog without a leash, or drinking two and half beers before driving home, you are overdue to beg for the non-existent mercy of some unlaid grinch posing as a judge (you know who you are, Kirkland Nyby). I’m here to tell you that being a white non-violent person…